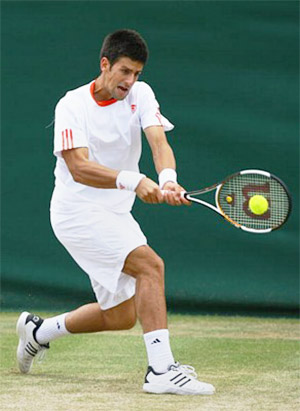 Like many of my peers, I miss the days when it was very difficult to hit a clean winner by me, or pass me at the net, or ace me outright. That was back when I was fast and quick, and didn't jump like the proverbial 'white-man', as the self-deprecating saying goes.

These days it's a very different story, and I suspect for many of you as well. The court continues to become larger and larger on my side. Father Time, of course, will always holds serve in the end. But, the now common full and partial joint replacements, the proliferation of miracle supplements, some of which can actually help, and the very viable synthetic synovial fluid injections (I've had 40 to date!) can singularly or collectively bring about improvement in happier motoring in both singles and doubles while stiff-arming that Father Time guy.

Thankfully, there's another more intangible counter measure for the chronologically and biomechanically challenged, a seldom mentioned or taught remedy that can be a big difference maker – "reading their mail."

Ever notice that you're often late getting off the mark to run down getable shots that then become difficult? Or that potential poaching opportunities at the net went right by you that you shoulda, coulda have picked off? Conversely, ever observe notice that tour players and better club players, too, seem to know where an opponent is hitting in advance, while moving effortlessly to meet the ball?

Sure, there are readily recognizable patterns of play that can be anticipated, but there is something else that the very best utilize as well – seeing/predicting where an opponent's racket on ball moment will occur in relation to their body position. Seeing, anticipating that fleeting racket face contact positioning for those few thousandths of a second will enable you to read their incoming mail.

An opponent's shot always goes where the racket head is facing at contact. Topspin, underspin, or even flat ball striking can also be part of the read which will be important regarding positioning.

Whether it's nominally In front, well in front, minimally in front, or late and not much in front if at all, opponent's shots can be read by tracking your own shot – direct sighting – in its outgoing path going "downrange" right into an opponent's racket. This kind of focus will allow you, after observing an opponent for a few games, particularly an unfamiliar one, to read where their racket will be facing at that revealing impact moment. 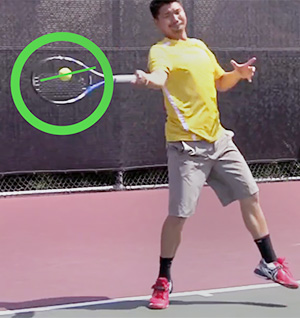 Do not confuse this visual technique with "watch their racket," a well-intentioned but misleading phrase I occasionally hear club players bantering about. Since the human eye is not adept enough to watch a racket speeding through the strike zone anyway, you'll lose your primary connection to the ball in the process and misfire.

To read someone's mail, or shot direction, you must learn to focus singularly on the ball – the ball and only the ball - as its entering an opponent's strike zone. Simultaneously, through your periphery – peripheral sighting – you can estimate, as previously noted, where their shot will be struck in relation to their body position. You'll now be off the mark a crucial split second sooner, creating more time for you to respond comfortably without feeling rushed.

Note: This is a learned skill.

Realize that this can only be achieved at the very last moment, although again, established patterns of play, and an opponent's observed tendencies can also contribute to achieving the read. This continual absorption of information – direct and peripheral in concert - is referred to in sport science as chunking.

Once an opponent has been observed repeatedly over a few games this technique becomes less demanding and you'll seldom be fooled or wrong-footed just like the pros you watch on TV.