Getting a Point in Jeopardy Back to Neutral 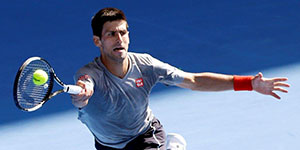 It's not unusual on occasion to find ourselves put in a vulnerable position in the backcourt by an opponent's incoming deep, penetrating, or even a sharply angled shot. Too often we attempt to one-up-them with an even better response of our own in an emotional, desperate effort to even the playing field "oh yeah" watch this mind-set.

Always tempting, but a generally a bad idea with a low success rate.

Better yet to aspire to trying to just stay in the point, ride out the storm, and keep the ball in play for at least one more shot, stymieing a momentarily advantaged opponent.

Make them win the point, don't hand it to them on a foolish silver platter. Conversely, they too can get a bit over zealous at the prospect of ending the point, especially following your obstinate in their face "save," and then make an unforced, overkill error with a wide-eyed overreached finisher.

Getting a point in jeopardy back to neutral should, in most instances, be your default response.

For example: I'm positioned on the deuce side in doubles. My opponent delivers a bomb of a forehand three feet from the baseline to my backhand wing that my partner at the net had no chance of poaching. My best response is to absorb and smother the incoming "$100 ball" by taking it on the rise with a controlled, safe cross court return away from a lurking net man - a somewhat underwhelming "$50 ball" that's hopefully deep enough without attempting an overly ambitious equaling pace. This tactic can frustrate an opponent who, seeing their best stuff negated, can become annoyingly cognizant of being denied a point they already had on the board.

Message sent. I will not beat myself. Here, have another one. Counterpunching embraced.

Another approach is to put up a defensive lob. If that's your preference in handling pace, especially when on the run at full stretch, make it a very, very high rainmaker, minimally 40' in the air to disrupt their on-top-of-you favorable position. That's buying time for you and your partner to regroup all the way back defensively, while challenging them to come up with the goods.

Nothing quite like observing a denied opponent blowing an amped-up overhead.

One time you actually should-could take the shot is when you've been pulled out wide way out onto the wing - let's assume again that you're on the deuce side in doubles – by, this time, a sharply angled cross courter. The net man, now looking to poach and anticipating an often weak cross court parry, ignores sliding over initially to take the down the line away, and leans into the middle which you become aware of peripherally. Now, under duress, and possibly unable to strike the ball far enough in front to go successfully cross court anyway, but still with a shot, go with the flow and drive the ball into the open space down the line behind the would be poacher.

Nobody home. You can even be a bit late with your contact point and still pull this off. Maybe every leap year you can go around the net post and experience exalting glory.

Virtually all club level matches, and even most tour level ones as well, are lost not won as a result of too many unforced errors. In club play this amounts to stubbornly playing outside of your true level. You can view the stat sheet at any match's end on the Tennis Channel and readily see the correlation between errors and the match's outcome. Whoever made the most unforced errors loses (thankfully there is talk among ATP officials to start differentiating between forced and unforced). Nonetheless, seldom is the result determined by who made the most winners – most especially in Clubland - except possibly for tour pros on a lightning fast indoor surface, or on the grass at Wimbledon.

Finally, in working with overzealous, over hitting error machines, I try to win them over with the aforementioned tactics in handling incoming big shots. With a little levity I sell: "Use their pace, laugh in their face."