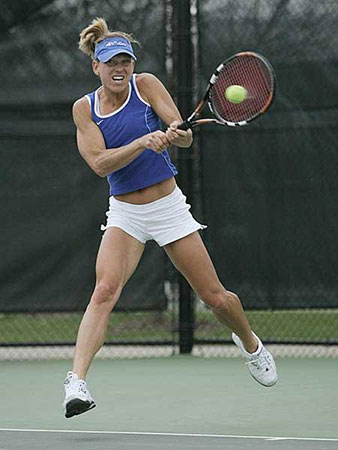 There is officially 21' of court space readily available for you to utilize for forehand or backhand positioning from the baseline all the way to the back fence. So, you might think, why not use all of it, and in a few instances you may have to. But that doesn't mean that you have to live back there as the only way to combat those incessant moonballer lobbing machines, who, irritatingly, are often very good at it.

The dismaying "pushers" – the long held moniker for these players - of the club tennis world.

Bad things happen when you have obligingly allowed these opponents – I'm especially thinking doubles here - to push you back into the hinterlands, especially since they then like to follow-up by angling you short in the front court, a technique that they have typically honed over years of practice.

This amounts to an effective, unwelcome one-two punch scenario – if you can even refer to it as a "punch" - experienced by the frustrated many who come wanting to play the game more aggressively.

Always backing up to allow these often exasperating slow, high bouncing balls to ultimately descend into a preferred knee-high wheelhouse amounts to not only having a very one-dimensional strike zone, but also leads to a passive, too far away from the net tactic that plays right into their fluff-a-nutter games.

As John McEnroe once so aptly put it with regard to playing against this bunch: "If they arrested people for being annoying on the tennis court, they'd be looking at doing fifteen to life." Reluctantly in their defense, however, it's still the last team/player to hit the ball successfully in the court who wins the point every single time, no matter.

Gotta learn to deal with it.

Consider that it's extremely difficult to be strategically proactive from a distant 55' or so away from the net (39' from the net to the baseline) while always playing the ball low, particularly when a potentially poaching net opponent, now with license to roam, is lurking there to ruin your day, and tube your partner given the chance. From another perspective, being about 80' away from an intended deep in the court long range parry placement is obviously going to be problematic as well.

This amounts to adults playing 10 & under tennis.

Sure, you can moonball the moonballer back on occasion to change it up and give them a taste of their own sour medicine. But they like the taste. That's how they play. Not exactly fun stuff for you, and probably not, to your credit, your game anyway. Not to mention that if it's a league match you'll be out there for 3 hours plus marathon – even with 10 point tie-breaker third sets - while your more enterprising teammates will be long ago in the clubhouse having already had a cocktail, lunch, and into dessert.

So what's the reason for this no answer, losing approach versus the lob queens and kings of clubland? It's a direct result of too many players living and dying with their very limited, exclusively knee high strike zones because that's all they've got. Versatile players have broad, flex strike zones with impact points that can be varied in height based upon an opponent's incoming ball trajectory, its resulting placement – short, deep, mid-court - and its off-the-bounce ascent angle.

This enables these more complete players to play balls both comfortably and aggressively, on their terms, without necessarily retreating into the landscaping.

Over many years teaching and coaching the game I've found that these insistent low ball hitters have alarmingly never been taught to alternatively "play the ball up" when appropriate, and/or are completely unaware of the option. That means racket on ball impact points that are without height limitations, including being able to handle those incoming shots that are getting up into the shoulder high+ zone, and even ones that are sufficiently high for responding overheads off the bounce – a lost art - from the back court when possible.

All of which collectively makes for a truly expansive strike zone that's not only possible but ultimately more effective versus McEnroe's lifers.

Welcoming, learning and adopting this approach will be helpful in keeping you from getting tangled up in the windscreens, getting your foot stuck underneath the back fence, and most especially eliminating slow-motion, no fun, dull, survival matches of attrition.

I'll always recall chatting off-court with a veteran player who possessed national USTA age group rankings when he suddenly angrily yelled out to his peers – peers in age only I might add - after observing them playing patty cake "doubles" nearby, "Hit the goddamn ball, that's what they make 'em for!"

The first step in not playing like that is committing to not surrendering to these loopy, popcorn games.

Reading these incoming rainmakers right off their rackets should be the trigger in choosing to play these balls aggressively "up" in your strike zone, wherever that takes you on court, versus routinely always going way back instead. The shot itself is simply a matter of positioning yourself to intercept these balls at their mostly reachable, after the bounce, apex moment before dropping down – give or take – while still comfortably in front of course.

It should be noted that those with two-handed backhands, with less upward reach than on their forehand, often prefer to allow these balls to drop somewhat lower for greater leverage.

As you might pondering a more detailed mechanics how-to right now, the good news is that if you've been playing for a while you already have the necessary core ball striking skills. It's already on your tennis muscle memory hard drive. You just don't realize it.

It's not that difficult to start employing this right away. As a bonus incentive, besides eliminating the tennis as an all-day track meet, you'll also be able to take defensive positioning time away from these typical slow-polks.

In the end, when it comes to your club game tennis career, I continually, humbly remind:

Standing pat with a less than complete game, one with weaknesses or lacking specific skills, equals backsliding as you get older and become physically less able - 3.5 goes to 3.0, 3.0 goes to 2.5.

Not so if you're of the forward thinking group that believes it's never too late to learn new skills, and to keep challenging yourself to do so.