On Being a Doubles All-Courter

Being an all-courter in doubles means being comfortable engaging in sustained cross court dueling rallies from the back of the court, playing the net aggressively by seeking to poach opponent's vulnerable returns – especially returns of first serves, eagerly pouncing on short balls and following them into a strong net position behind an effective approach shot that challenges opponents leading to easy pickings at the net, and mixing in both the occasional serve and volley, or "chip and charge" (not necessarily literal) returns of weak second serves in particular.

You're one dimensional embracing very limited options in the truly dynamic doubles equation. 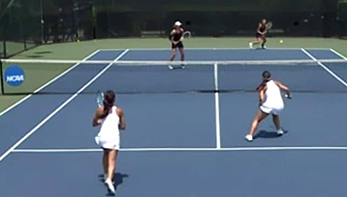 Some club level matches feature players playing "singles for four." Ugh. For some it appears to be a perceived long way to the net, and it's as if there's quicksand up there. This is at least partly because of the often rationalized refrain, "if I come in they'll lob over me."

There's two typical reasons why facing Lucy or Leo Lobber is dreaded and feared by so many in club level tennis. First, these same folks typically never ask "for some up" – overhead practice - in their pre-match warm-up. That's assuming that they even take the time to have an actual productive warm-up. So, as time goes by, they never develop a reliable overhead. They're in overhead avoidance mode since it's not a good shot for them, and, with their approach, never will be. Second, when they do come forward – having no real choice since some incoming balls are short – their approach shots generally fail to make lob happy opponents uncomfortable in order to elicit a weak response, leading them to then believe that the opposition are the best lobbers on the planet.

Your net game in general is only going to be as good as the shot you came in behind.

If I target a deep penetrating approach shot right at a lobbing oriented peer, jamming them, they are going to be hard- pressed to hit an effective lob, leading to easy pickings at the net for myself or my partner. Or, if you develop an approach "dropper" that brings them in to the net, where they do not want to be, you will have taken away their quasi weapon, and then can out volley them in close, quick exchanges.

In my on-court doubles coaching sessions, and even in conversations about the subject of putting pressure on opponents versus them grazing exclusively in the back forty - not even attempting to put opponents on the hook - I'm successful in showing them that being a sometime attacking all-courter is actually doable, and can pay dividends with practice.

Trial and correction versus standing pat.

But too many, in friendly doubles that count for nothing in particular, are willing to step outside of their comfort zone.

I recently enjoyed reading about current world #8 Andrey Rublev's new, altered mind-set in his steady rise to the top over the past couple of years. He shares that he has evolved from "win or lose" to a "win or learn" attitude.

In the end, if you're interested in improving your double's game by becoming an all-courter, especially when it's only a practice match with nothing at stake – after all, let's get real, you're not risking prize money, ranking points, or losing endorsements – try developing a more complete game by improving your execution of less comfortable tactics and strategies.