A Roadmap Into "The Zone"

You've heard of it. Perhaps you've even read about it – if not I would suggest that you research mental skill pioneers Timothy Gallwey (The Inner Game of Tennis - 1972), and Dr. Jim Loehr (Mental Toughness Training for Sports - 1986).

Have you ever been there? Do you know where it is, and how to get on its path?

Well, it's very likely that the vast majority of you actually have been there, albeit most likely a fleeting visit, but, nonetheless, still have experienced it, although you may have not fully realized it at the time.

To be sure, however, you did indeed feel it on a sensory level. Ethereal. A sport's euphoria. 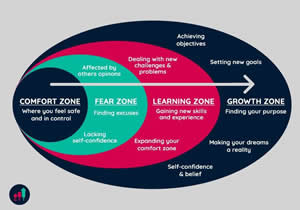 A quite accidental but common gateway exists specifically in those challenging returns of serve, the ones that you initially anticipated were going to be in, but, in the very last split second, after you have committed to your forehand or backhand reply, you realize it's actually out by a hair. Fully committed to your shot, you, now realizing in an instant that there's nothing at stake with zero pressure, totally relax and let the racket go freely through the ball. Completely unencumbered with virtually no muscle tension or accompanying mental/emotional stress, a very powerful, penetrating, effortless thoughtless return happens, one that's not only deep and powerful, but perfectly placed!

An unreturnable. Remembering one of those moments now?

Back in the day, long before there were sports psychologists and/or the now more popularized term "performance coaches," two phrases were commonly used in reference to players who were far exceeding their recognized normal level of play: "He's unconscious," and "She's playing out of here mind."

Both, prescient and on the money then and now, refer to playing without thinking and totally trusting your game, reminiscent of Nike's slogan, "Just Do It." The million dollar question is how do you achieve that state of mindless relaxation, such as the one in the aforementioned serve return, in all of your match play when the pressure is on?

"See it, feel it, trust it," as the grizzled old rancher former golf pro in the Texas outback, played by Robert Duvall of course, says in the delightful and insightful movie, "Seven Days in Utopia (2011)," in which he guides a failed young tour player in finding his true potential game and mind-set.

On the tennis court, there exist two separate mind-sets: in-point and out-of-point.

During the point you are ideally unconscious, not thinking analytically – that would be akin to painting by the numbers, operating in an uptight, calculating left brain, running a 10 point check list of do's and don'ts while striking your shots. Playing in that state of mind actually, literally makes excellent ball tracking pretty much an impossibility.

Conversely, you actually can be thinking, but in the right side of your brain. That's exclusively thinking in pictures – imagery – visualizing both the direction of your shots as well as their intended margin over the net, including trajectory, while you focus on meeting the ball at the perceived optimal place and time.

That's it. That's all you can manage during the action. Ball striking technique is either already firmly embedded on your tennis hard drive, or it isn't.

That's where practice comes in!

In between points is the time when you can consciously coach yourself up with reminders of executing your game's core fundamentals, or strategy and tactics. Then go right back to only the ball and visualizing your shots, and, yes, a kinesthetic awareness of your body in motion. Nothing more.

By the way, that Nike slogan was and is far more than just marketing. I remember a time when I presented reward tees to aspiring players of all ages after a particularly good session - the ones who were willing to let go of their fears and embrace the game that they had - that said, "I Just Did."

Believing in the game you've brought to the court is a must. To distrust it at the ball striking moment – self-doubt occupying your mind - is a recipe for disaster.

It's also important to recognize that trying harder, triggering high muscle tension, will never ever get you into your zone. Although trying harder could be useful for maximizing your footwork in both getting in position for your shots, and defending the court against theirs, and is certainly in the mix for performing well. But it's mostly an intuitive, unwelcome human emotion when interacting with flying yellow spheres in a 2,808 square foot arena (doubles) with an infinite ceiling.

Simply, relaxed muscles are "smart," fast and loose and powerful. Tight muscles are "dumb," slow and rigid and weak, and unable to replicate successful efficient stroking paths with any consistency.

Robotic spastic play in contrast to letting go, playing freely, starting with not strangling your grip.

Are you familiar with the fable of the two Samurai warriors, identical twins with the same fighting skills but aligned with opposing warring houses? Upon facing off in battle one brother assumed his fighting stance while gripping his sword very tightly, while the other, in the same stance, held his sword in a relaxed manner. Shortly thereafter the former's head fell heavily to the ground.

Although tennis is not life and death, at times the match pressure, or the pressure you place on yourself, can seem like it and become overwhelming, especially if you're afraid to lose and do not trust relaxation when it really counts. Rafa Nadal's take on this always comes to mind: "I do not fear losing. I fear the fear of losing."

Becoming an outstanding ball tracker, a crystal clear visualizer, and a dedicated breather at the racket on ball impact, along with regularly scheduled practice sessions in between matches – and with performing your best every time out being the #1 goal – will at least get you on the path to cracking open the door into your zone, and even get you there more and more often.