The All-Important Dynamic of Gripping

Right off, I'm not referring to Continental, Eastern, Western, etc. grip positions. That's for you and your pro to tweak in order to maximize your existing shot effectiveness in creating topspin, underspin, sidespin, or at times, almost no spin at all, i.e. flat. 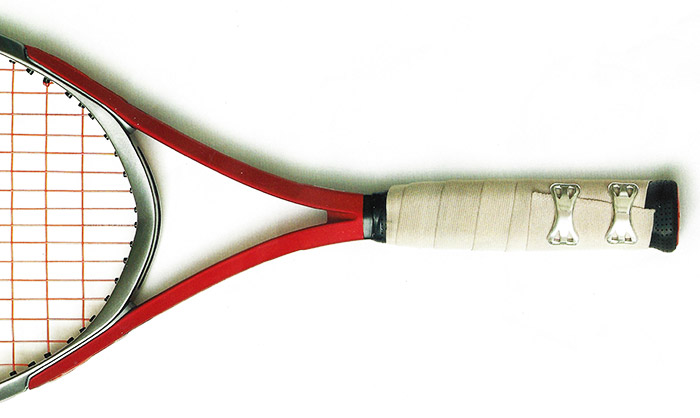 I am referring to grip pressure, as in how tight you're holding the racket between points: in the ready position, during the serve ritual, during the point, and especially at shot impact.

One of my regular lesson clients who has, to his credit, raised his level considerably in the last year, recently mentioned that he believed that utilizing a relatively relaxed grip tension was for him, the 2nd most difficult, important developed skill in tennis (he was referencing my recent article/essay on the game's #1 most important skill being ball watching or ball tracking.)

On a scale of 1 to 10, with 10 being a grip stranglehold, or the proverbial "death grip," too many players are indeed guilty of holding the racket far too tight. Trying "harder" is of course a natural human response to stress – think "fight or flight", a conditioned human response passed on over thousands of years.

Intercepting a fast flying yellow sphere, at the right place at the right time, and then redirecting it with a mechanically efficient ball striking technique is indeed stressful. Challenging but at least you're not running away from a hungry dinosaur. It's just a game. Right?

In tennis, this naturally occurring try-harder reflex eliminates any chance of producing a fluid, effortless, unencumbered, powerful kinetic stroking chain and undermines your racket's inherent "swing weight", not the same as the actual scale weight.

Want to see it? Turn on the Tennis Channel anytime at all and watch the world's best. But in your own on-court real time, you have to feel it kinesthetically – dictionary defined as "…a sense that perceives bodily movement, position, and weight and is mediated by nervous elements in tendons, muscle, and joints; also: sensory experience derived from this sense."

Do not think about it. Feel it!

I like to offer to aspiring players that relaxed muscle tension is, if you will, "smart," enabling one's ability to replicate the aforementioned smooth stroking fluidity on a repeated basis. Tight muscle tension is "stupid," preventing any possibility of repeating with any consistently a free flowing game – hitting "at" the ball instead of "through" it.

In this day and age, with all the progress that's been made in racket technology since the woodies and the metals which ended up on your garage wall, it's almost impossible to select a "bad" racket. But it's paramount that your racket choice is a good fit for your on-court physicality and your typical stroke lengths – long, short, medium. You can and should rely on a world-class stringer and racket technician – like our own local Rich Vernsey at Wrigley's Tennis in Punta Gorda, FL. (He is a member of the Yonex international stringing team and soon to be on his way to work the Tokyo Open in October!) He can steer you into the right frame for your game with the right strings, with the right gauge, at the right tension. However, be advised that inefficient technique will completely undermine any racket's designed in qualities, even if it is the perfect string selection/tension and is a good fit. 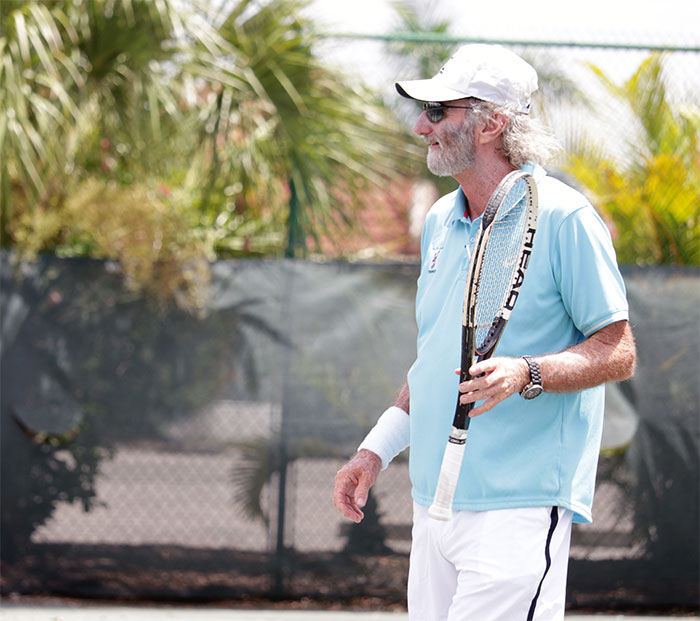 Here's how you can begin to monitor and regulate that tension:

In Between Points: It's not unusual to observe club players proceeding from one point to another clutching their racket in their dominant hand. Unless it's a one-sided mismatch, the constant strife and adversity found in a competitive match can unconsciously spill into an excessive, often escalating, too tight grip tension leading up to the start of the next point. I believe it was the Swede, Mats Vilander – winner of 7 Grand Slam titles and a former world #1 back in the 80's – who first made a practice of placing the racket in his non-dominant hand in between points, promoting relaxation in his dominant hand, a muscle tension reprieve for those 15-30 seconds prior to play.

In the Ready Position: When readying to return serve – 2nd most important shot in the game! – your non-dominant hand is ideally the dominant hand in the ready position, whether you're a one-handed or two-handed backhander. Your dominant hand – your right hand assuming you're a righty - should be just touching the grip very lightly, far less than even a 5 on a 1-10 scale.

During the Serve Ritual: When preparing to serve – ball bouncing along with some version of the synchronized "rocking" motion involving both arms in sync (watch Canadian pro Milos Raonic for an exaggerated example), much like a baseball batter warming up his swing prior to the pitch – both hands, and arms too, should be completely relaxed during the toss and in the loading of the racket, i.e. a "soft" take back.

In the Point: Once the point is ongoing, be kinesthetically aware of your grip pressure. After making a shot, recovering position, and getting back into a defending position, the left hand (again think right hander) should be slightly dominant on the grip for both one-handed and two-handed backhand players, with the dominant hand light on the grip.

At Shot Impact: The impact moment can be stressful and often is. As a result, it is not unusual for players, even players dutifully adhering to the above techniques, to experience an undermining big surge in their grip tension at the crucial moment. Since it's normal to have some increase, it's important to maintain a very low grip tension while in pursuit in order to accommodate some, but manageable, slight increase at the ball striking moment, say an escalation from 2 to 5 on that 10 scale.

Finally, for me it's not unusual for a new lesson client, and even the occasional repeat student, upon the racket twisting in their hand at impact, to believe that they were not holding the racket tight enough. No, no, a popular myth! The racket torqued because of an off-center hit, not because of a grip too loose. Balls struck in the sweet spot require comparatively little grip tension in any size frame.

Note: oversize rackets do not solve the root cause of failing to watch the ball effectively, as in all the way into the racket, at least as well as the limited eye can achieve, without being tempted to look up at the court prematurely. It's not moving.

Smooth ball striking just ahead! And, check out Pro John Craig's take on the subject in his excellent accompanying video available for viewing in this month's site update – www.JakBeardsworthTennis.com