The service toss: myths and realities

It's no surprise that the service toss is often problematic for many, even for some on the professional tours as evidenced by their not so unusual catches and redos. So, recognizing the toss as an integral part of serving well, especially since it's executed with one's non-dominant arm, should not be taken for granted.

Two-handed players could have a slight advantage since they routinely utilize their "off–hand/arm" as an active component in their backcourt game, and some at the net as well, at least in clubland. One-handed backhand players, because of the obvious lack of direct ball striking involvement, could be at a slight disadvantage.

Interestingly, just about anyone and everyone can typically execute a workable service "throwing" motion with their dominant arm without much difficulty. Even beginners. Cake.

Yet that sometimes spastic left arm (for a righty) which many of us have experienced, can also be hampered by a lack of understanding of the tosses nuanced mechanics, and is no minor matter. The toss is, and should indeed be, weighted heavily in the serving mix. 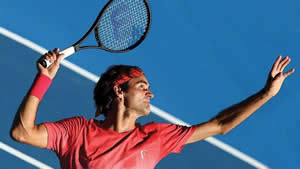 Just consider that when forced to use your non-dominant arm for a simple daily off-court task you'll get quickly reminded that things can quickly become awkward sans the benefit of one's usual dominant muscle memory.

By the way frustrated servers out there, how many practice serves, which of course includes practicing one's toss, did you hit last week? And how many did you take prior to starting your last match?

Nonetheless, a full range of motion toss, that we also typically see so perfectly executed by the pros, even when well mimicked, is not the absolute singular panacea to serving success that is seemingly being fashionably hyped by so many clubbers lately. I know since on many occasions I have experienced lesson clients, who excitedly extol its alleged universal serving cure, to then drop their head like a lead weight before striking the ball.

Sure, of course you want to fully extend your tossing arm fully upward and slightly outward prior to the ball being released out of your fingertips for toss control - not by smothering the ball in the palm of your hand. And, crucially, maintaining an anatomical neutral hand-arm position, in the same position that your arm hangs naturally by your side, will be far more efficient with better results. The common, ill-fated, palm-up approach – including the aforementioned ball smothering - tends to result in the ball rolling off of your fingertips with uncontrollable spin, often sending it backwards and/or all over the place.

Being able to release the ball with little or no spin by opening your fingertips up right at the release point, instead of rolling it off, is instrumental in owning a consistently well placed toss.

But, and here's the common myth, does that impressive looking full range of motion toss, even in a better anatomical position, keep your head up and eyes on the ball for that fleeting crucial moment of optimal racket on ball contact? That's a big fat NO! On the positive side, it does trigger dropping/loading your hitting shoulder as you coil and toss, reduce uncomfortable hyperextension on your neck especially in older players, and push your front hip slightly forward for an effective kinetic chain trophy position explosion.

But let's be really clear: Once you pull the trigger and go up after the ball – with the ball positioned generally approximately as high as you can comfortably reach with your racket for the typical club player, and approximately about an arm's length in front neutrally placed not too left or right – your extended tossing arm will then appropriately drop down and fold into your body to launch and enable a clean, powerful strike of the ball.

With all that going on you must still, nonetheless - without any mythic magic elixir - labor to keep your head up and your eyes focused on the ball for your perceived best contact point – that's what you're "watching" for.

To support that necessity utilize some leg drive up and off the court through impact, initiated mostly by your front foot. In a word, jump into the shot versus being grounded – think front foot literally nailed to the court – which leads to kinetic chain interruption, resulting in undermining, premature trunk flexing that includes your head being yanked downward, taking your eyes completely off the ball.

That's looking for the return while you still have the ball. Serving blind.

In teaching and coaching hundreds of hours per year the big serving challenge for most remains - always the #1 problem exhibited by frustrated servers, including those who are otherwise good players - keeping one's head up through the fleeting contact moment. That's a fraction of a second since high speed photography shows us that a mere five-thousands of a second is how long the ball is on the racket face at best. That's the mechanical Holy Grail of serving, if there is one.

Not to be ignored, the mental skill is visualizing a "window" immediately above the net, at your ideal margin to the net, to pass the ball through to achieve the intended in-box placement. Connecting the dots if you will.

So, a good, fully extended toss, although still an important component in the serve, is not singularly responsible for being a good, consistent server. All components working sequentially are required.

Good thing we get two.